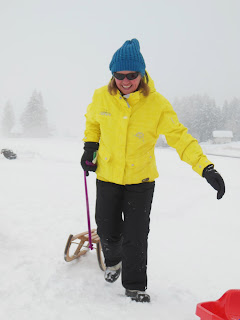 There is a sad absence of photographs of me skiing thanks to my inability to take pictures of myself, and the fact that John and Jude are in different places whenever I'm skiing. So here's one of me sledging - which was great fun. I thoroughly enjoyed skiing - especially as I have yet to break anything!  I descended a blue run twice today without falling today and although I did wipeout on the drag life (bit embarrassing that!), I was really pleased with myself! Still, my body is very achy - I should have done this when I was 4 - and I'll be glad not to put those boots on again tomorrow morning! 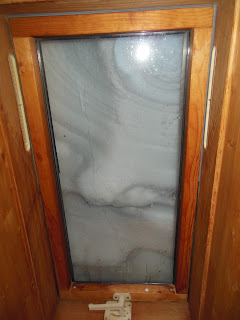 This is the skylight in the bathroom. Looks like there's a cloud baby looking down through it to me, but it's really just snow. 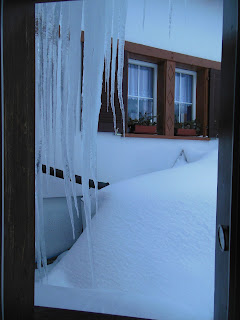 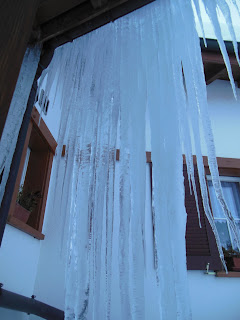 And here are the icicles outside the kitchen window. Impressive eh?

The boys have said so many funny things today but I've forgotten them all as I didn't write them down. We did have a great game of 'replace the name of the film with aardvark' and our best ideas were - A series of unexpected aardvarks, Nativity:Aardvark in the manger and Minority Aardvark. Much giggling - and I was very impressed by the boys' knowledge of films!

The boys wiping out sledging was hilarious today - they were competing to see who could get the most 'air' off their sledge and land in the most spectacular manner. At one point, Isaac managed to land on top of a snow bank, still seated in his sledge, two foot in the air. Much complaining about steering wheels in crotches though!

Smile in other languages
In Icelandic - brosa