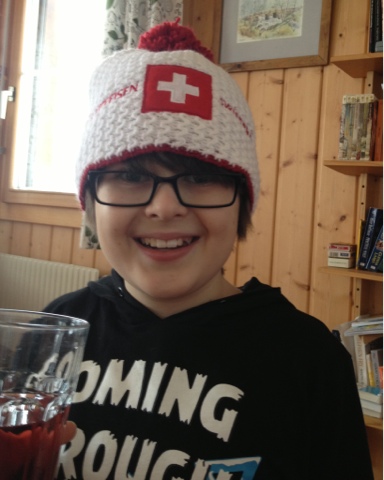 Jude has wanted a Raiffeisen/SwissSki bobble hat since I ran the Silvesterlauf and he saw a group of children wearing them. He then saw people wearing them on TV at Wengen, watching the ski race. Today he finally got one as the bus down the hill to Amden stops outside the Raiffeisen bank. Whilst John was extracting cash from the cash point I went inside and discovered that you could buy the bobble hats over the counter! Great joy and jubilation when I returned with the prize!!

Smiles this morning too as I had my first ski lesson - and I wasn't as bad as I had feared. I did fall over but not as many times as I had feared, and I have been up two mountains, by drag lift and on a dreaded chairlift - and I survived. And I also made it back down them under my own steam - with lots of patience from my instructor who held my poles to guide me at regular intervals and to stop me flying over the edge!
Smiled broadly when I had a sudden flashback to #ililc2 and Tchic Tchac with Jo Rhys-Jones :) then promptly fell over as I lost concentration :S

Things I heard that made me smile today
Jude asked if we could listen to John's iPod music "cos he's got that album with Slade and Dinosaur on it"
On returning from our bus ride to fetch provisions, John and I were greeted by the boys who looked distraught about something. We feared an accident or something broken. Turned out to be a dirty cuddly toy as Jude picked it up with the fire tongs!
Still giggling over the Manx knobs :)

Smiles in other languages
In Estonian - naeratus

NB Smiles 39-42 will be published on our return on Friday unless I get wifi before then!