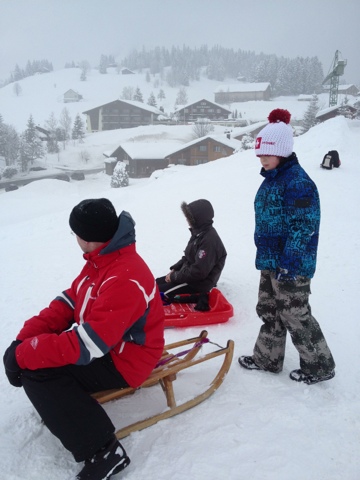 Another day of fun on the piste - I can now do something resembling parallel turns and survived the chair lift twice! Anina is so lovely and very very patient.

Poor Isaac has been ill and missed out in ski lessons, having to stay in bed, so it was lovely to see him out sledging with us this afternoon - and wiping out spectacularly. I was scared he was hurt but when I rushed to check he was ok, he lifted his head and said "Get in!!" with a huge grin on his face.

Playing Name that Tune with the boys was a source of great amusement too, especially as John decided to take control and play 80s music (no complaints from me but is that fair when the contestants were born in 1998 and 2001)
"My confused brain is making all these songs sound like the Macarena." (Isaac)
"Is it Squeeze Up the Junction?" (Jude)
Isaac claiming that he was at a disadvantage as he had blocked ears, despite scoring more points than me.
Jude chastising Isaac for having a coughing for mid song - 'it's putting me off!'
"Is THIS Squeeze Up the Junction?" (Jude)

Other things that made me smile
@mfljess used an idea from my session at ililc3 in her lesson today and it went well.
Photos of my sister and brother-in-law dressed up for a Murder Mystery.
Looking out of the window into the pitch blackness of the mountains and seeing a snow plough's headlights looming towards us.

Smiles in other languages.
In Kannada - ಕಿರುನಗೆ