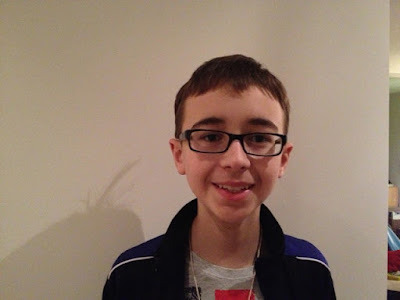 Isaac has new glasses and looks great in them. They were only ordered on Saturday as well which, given Isaac's prescription and the fact that they were actually ready yesterday, is very fast! The shadow in this picture also made me smile - can't hide that unruly tuft! ;o)

Several items on The One Show made me smile today -
Dodger the dog showing emotions much better than the actors!
The Springer Spaniel feeding the lamb with a bottle.
Alistair McGowan's item on accents, visiting Nottingham, Tamworth and Birmingham.

I also smiled when Jude, on a sick day trawl through the channels for something to watch, discovered Frasier and announced 'He's much older in this than in Cheers!'

And I received notice of the Winterthur Marathon ;o)

Smile in other languages
In Esperanto - rideto