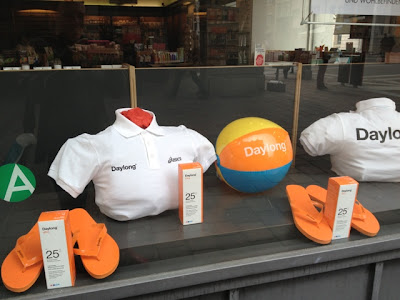 Short post today as I'm typing left handed due to some sort of RSI type pain in my right hand. I had to smile at the display in our local Apotheke. It's 1C and they're advertising suncream. That's OK as you need sunscreen when you're skiing. It's the beach ball and especially the flip flops that amused me - there's snow on the ground and even I wouldn't go out in flip-flops!

Jude had a haircut - and kept smiling as he lost some of his mop! And I lured John and Isaac into Metro in search of a pink Tshirt for Isaac for 'The Day of Pink' at school - they concluded that there were actually some good clothes in there if you get past the ground floor and ignore the 'Goth corner'!

Smile in other languages
In Quechua - asikuy

(I'm running out of languages for my 'smile' so if you know a language that I haven't featured yet, please let me know. I think I've pretty much exhausted Europe but there are more than 86 languages in the world!)