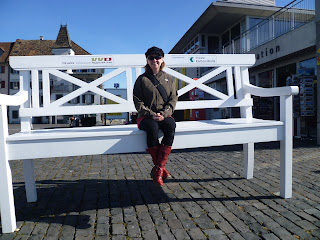 Haven't got a photo taken today - been too busy washing, shopping, Zumba-ing, cycling, baking and going to the theatre! This was taken last year in Rapperswil. My favourite bench!

Zumba had me smiling. It always does, but there seemed to be rather a lot of making up of steps today! And choosing tops for our 'performance' may prove a step too far - how can you get 10 women from different countries and cultures to agree on a top they all like from a limited number of options?

I went to the theatre tonight to see a Shakespeare play. With John. This hasn't happened since 1993-4 - and that was the first time he'd ever seen one! It wasn't your 'normal' Shakespeare play though - I don't recall there being a food fight in A Midsummer Night's Dream let alone any of the other plays, and it's not everyday that the main characters disappear into a pop up tent, or two characters appear as if in an 80s computer game, controlled by Puck. Lots of smiles - not least at how bemused the Swiss audience were not only by the broad Irish accent but by some of the humour too.

Smile in other languages
In Haitian Creole - souri
Posted by lisibo at 22:49