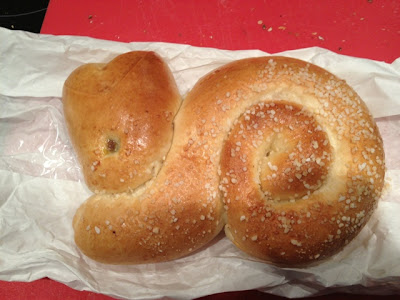 I'm craving hot cross buns and am really not capable of making them; I'm 'Running Lisa' not 'Baking Lisa' after all!)
However, this Osterhase is nearly as good. A bit like an iced bun without the icing but with huge crystals of sugar instead. Lovely with a scrape of butter. 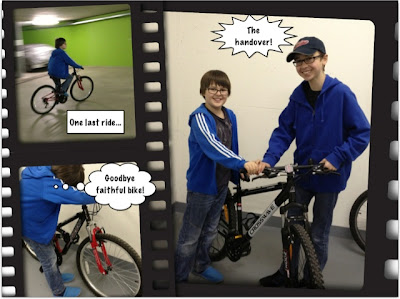 Second smile was Isaac getting a new bicycle today, and handing over his old one to Jude - see above! Amusement was heightened by John and Isaac's glee at beating the 'it's a holiday so no shops are open' by going to Zürich Flughafen to buy it, and then the need to buy the bicycle its own ticket for the train. And at handover time, I had to smile as Jude took his old bike for one last ride and gave it a hug before accepting the new one (Isaac's old one!) He is so dramatic! And then John lived up to his Fiddler nickname by making the back light fit as well as the mudguard when there really was only room for one!

Other things that made me smile today
My hand/arm isn't as painful so I can play with my phone/iPad/MBP more :o)
Bugsy Malone - classic film and so funny. And I'm so pleased that Jude loves it too.
John making us play 'Guess where my sandals come from'; our first answers were - Central African Republic, Tuvalu, Vanuatu, Comoros, Nauru. Do you think we watch too much Pointless? (The correct answer was Ukraine.)
The overpowering smell of Gran Padano which is emanating around the flat after Isaac spilt it all over the floor during dinner. I didn't smile at the time but what can I do? He's a teenager and not quite in control of his long limbs!

Smile in other languages
In Breton - mousc'hoarzhin  (thanks to @SylvieBRawlings!)