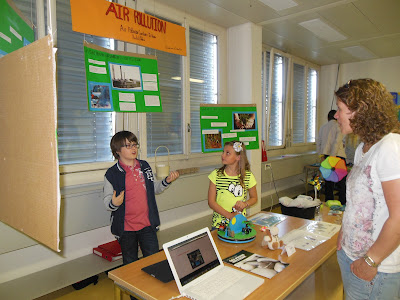 I'm a very proud Mummy today as all Jude's hard work over the last few months culminates in his PYP Exhibition. Here's Jude (and his partner Jordan) telling my friend Miranda all about the causes and effects of air pollution. I had no idea he knew so much about it!

Apart from smiling with pride, I had to smile at all the comments from others about him including from the Principal's husband who declared "your son's something else!" and another parent who called him " a "little professor."

And here's Jude's video explaining how to create Smog in a bottle.